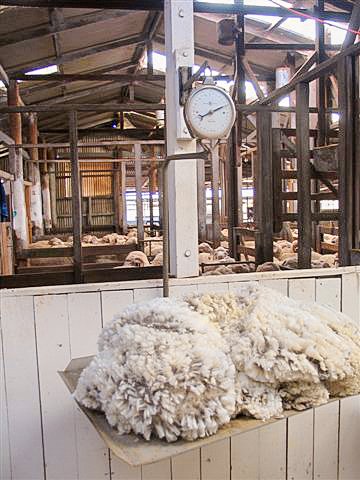 Ram shearing takes place each autumn at Cranmore Park, with wool from the 2006 ram shearing living up to the Cranmore tradition of being fine, white and well aligned. The sheep have five months of wool growth, following lamb shearing in late spring.

The wool produced by the rams was of a consistently high standard, with an average fibre diameter of 17.7 microns. The average fleece weight was excellent, weighing in at 3.02 kilogams per head averaged over 510 rams. The pol merino rams also shore very well, with average fleece weight over the 36 pol rams being 3.01 kilograms.

The average fleece weight of the progeny test rams was 3.11 kilograms per head over 235 rams.

During ram shearing, the shearers commented on the lack of wrinkles in the skin of the Cranmore Merino, stating that the rams were easy to shear with loose skins. This is testament to one of the primary breeding objectives of Cranmore - to breed easy care, plain bodied sheep.

Back to the News page

See us at the Dowerin Field Days August 2021

Back to the News page
Cranmore Park, Moora, Western Australia

Like the sound of the easy-care, white wooled Cranmore Merino?

Contact us here at Cranmore Merinos for more information or see us at he annual Dowerin Field Days.